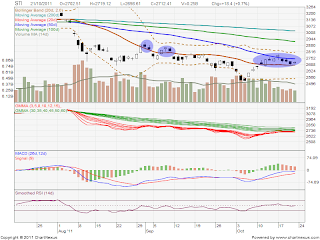 In the past week, STI managed to stay above the 20Day Moving Average, unlike previous occasions, where it fell below the 20DMA shortly after climbing above it. So, will it be different this time?

Fundamentally, we are still in a down trend (We are below 200DMA). GMMA is converging, the long-term (green) and short-term (red) moving averages are converging, meaning a potential change of trend. Volume has been rather low these few sessions --> an increase in stock prices with low volume suggest lack of broad base participation and may not be sustainable.

RSI is about 50, in neutral territory, meaning we are neither overbought nor oversold (50-50).

With DJIA having broke resistance last night. There may be a real change of trend and we might really have bottomed on 4/5 Oct.

On a personal note, I look forward to receiving dividends from Sabana REIT next month! =)
Posted by ming at 12:32 PM 0 comments

Email ThisBlogThis!Share to TwitterShare to FacebookShare to Pinterest
Labels: STI

SINGAPORE: Singapore's economy grew by 5.9 percent on a year-on-year basis in the third quarter of 2011.

On a quarter-on-quarter basis, the economy grew by 1.3 percent, a reversal from a contraction of 6.3 percent in the previous quarter.

Releasing the advance GDP estimates for the third quarter on Friday, the Ministry of Trade and Industry (MTI) said that the Singapore economy is expected to grow by around 5.0 percent in 2011.

Commenting on sectoral performances, MTI said the improved economic performance in the third quarter was mainly due to a pick-up in growth in the biomedical manufacturing cluster.

MTI said for the rest of the year, growth could be weighed down by the softening global economic conditions. In particular, the electronics cluster is expected to remain weak due to the easing of global electronics demand.

It added that sentiment-sensitive activities within the financial services sector could also be dampened by heightened economic and financial uncertainties.

As pharmaceutical output is expected to be higher in the near term compared to a year ago, the biomedical manufacturing cluster could provide some support to growth.

Source: Channelnewsasia
Posted by ming at 8:52 AM 1 comments 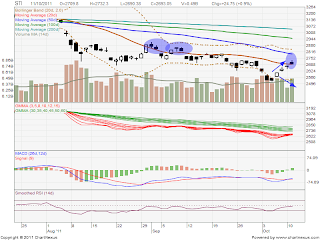 Background: In the past few weeks or even months, I have been quietly following the market. I must admit I haven't been posting my analysis of the market for quite a while now, primarily because I am rather "uncertain" about how the market will swing.

My view of the market:

From the chart, we can see that every time STI climbs above 20 day moving average(20DMA), it falls back below the 20DMA. And the recent rise in STI was accompanied by declining volume. So, will history repeat itself?

GMMA indicates that we are in a down-trend. And we are in indeed in a down-trend as 20DMA is below 200DMA. Smoothed RSI is about 50%, do notice that every time RSI hits 50% or thereabout, STI starts correcting itself.

Also, do note that earnings season is here. On Wall Street, Alcoa kicked off earnings season today and DJIA is off around 16 points today, a trading range for today was "small" - DJIA fluctuated between less than 100 points, an anomaly of late.

In Singapore, Singapore Press Holdings (SPH) will be reporting her earnings today. So, how will the market pan out? Time will tell I guess.

Ok, will be signing off here. Trade/Invest wisely and stay safe (in this volatile market)!
Posted by ming at 6:40 AM 4 comments

Email ThisBlogThis!Share to TwitterShare to FacebookShare to Pinterest
Labels: STI

Wall Street posts worst close in over a year; Dow down 2.36%

NEW YORK: Wall Street suffered another slump on Monday as concerns about the economy, contagion from the European debt crisis and rumours of an American Airlines bankruptcy dragged down markets.

Despite a brief rally on news that a key indicator of the health of the US manufacturing sector was better than expected, the main indexes ended the day firmly in the red.

"A new quarter brought more of the same on Wall Street," said Sameer Samana of Wells Fargo. "Worries about Europe drove the Dow sharply lower after Greece said it will miss its deficit targets for 2011 and 2012."

Banking stocks took much of the brunt.

Bank of America traded down 9.6 percent, Citigroup was down 9.8 percent, JPMorgan Chase was down 4.9 percent and Morgan Stanley was down 7.6 percent.

Also in the spotlight was American Airlines. Its shares ended the day down a whopping 33.1 percent, amid rumours that parent company AMR Corp would file for bankruptcy protection.

Morningstar analyst Basili Alukos said the selling comes after an "abnormal" number of pilot retirements in the past two months, with the pilots seeking to sell off their own stocks in the company out of fears it would fail.

That view was rejected by other analysts.

"While we view AMR as the financially weakest US airline, it had $5.0 billion in cash/investments at the end of Q2. Our Q3 forecast is for a loss of about $110 million, and we do not think the company has been burning through an unreasonable amount of cash," said Jim Corridore of Standard & Poor's Equity Research.

"For this reason, we would be surprised by a bankruptcy filing in the next 12 months."

The broader market had kicked-off the day amid a now-familiar sea of red - on news that Greece will not meet deficit-cutting targets - the focus on Wall Street turned to the domestic.

The Institute of Supply Management's purchasing managers index (PMI), a closely watched indicator of sentiment in the manufacturing sector, showed a surprise rise.

"The PMI registered 51.6 percent, an increase of one percentage point from August, indicating expansion in the manufacturing sector for the 26th consecutive month, at a slightly higher rate," said ISM's Bradley Holcomb.

Economists had expected the index to grow at a slower rate to 50.5 points.

The figure pushed the Dow to a modest rise of around 0.2 percent over the start of the day.

But news from Europe continued to weigh on US markets.

Bond prices rose significantly. The 10-year Treasury bond yield dropped to 1.75 percent from 1.92 percent on Friday, while the 30-year yield fell to 2.72 percent from 2.92 percent.

Bond prices and yields move in opposite directions.

Seems like the bad is getting worse...
Posted by ming at 7:30 AM 0 comments

ming
A 19 year-old guy who started his investment journey at the age of 18. He aims to achieve financial freedom at a young age.