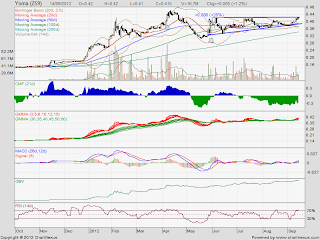 Email ThisBlogThis!Share to TwitterShare to FacebookShare to Pinterest
Labels: Yoma

The United States Federal Reserve, worried that improvement in the unemployment rate has stalled, announced a third large purchase of bonds on Thursday in an effort to bring down long-term interest rates and spur growth.

The Fed said it would buy mortgage-backed securities at a pace of $40 billion per month.
The Federal Open Market Committee, which ended a two-day meeting on Thursday, said it was concerned that, without the action, “economic growth might not be strong enough to generate sustained improvement in labor market conditions.”
In addition to bond purchases, the Fed said it intends to keep the benchmark short-term interest rate, the federal funds rate, at nearly zero until mid-2015. The prior guidance on the first rate increase had been late 2014.
The guidance now extends well beyond the term of Fed Chief Ben Bernanke, which ends early in 2014.
Stocks spiked but then lost about half their gains after the Fed statement was released. The U.S. dollar turned up and 10-year Treasury prices turned down.
The Fed has left the federal funds rate at nearly zero since December 2008.
The committee’s vote was 11-1. Jeffrey Lacker, the president of the Federal Reserve Bank of Richmond, dissented, as he has at every meeting this year.
The Fed took the aggressive action out of a growing concern for the economic outlook, especially the anemic labor market.
The Fed said it would continue to monitor incoming information.
“If the outlook for the labor market does not improve substantially, the committee will continue its purchases of agency mortgage-backed securities, undertake additional asset purchases, and employ its other policy tools as appropriate until such improvement is achieved in a context of price stability,” the FOMC said.
Despite holding interest rates at zero for more than three-and-a-half years, and the central bank buying $2.3 trillion in assets, the unemployment rate has been stuck above 8% since early 2009. There are 12.5 million unemployed workers.
Economists and even Fed officials disagree on whether further asset purchases will have any lasting effect on the economy.
The Fed hawks are worried that core consumer price inflation is running at a 2.1% rate over the past 12 months despite the weak economy.
Economists expect sluggish growth for the last six months of the year. Headwinds from the European sovereign debt and banking crises are holding the economy back.
There is also mounting concern over a stalemate over U.S. fiscal policy.
Deep spending cuts and higher taxes will take effect Jan. 1 unless the parties agree to change current law.
Fed officials see that slow growth rate extending into 2013 and 2014. The central bank will release updated economic forecasts at 2:00 p.m. that also include 2015 for the first time.
Bernanke will hold a press conference at 2:15 p.m. Eastern.
The open-ended plan is designed to give Fed more options to adjust the program. The central bank can also keep the program going as long as possible.
St. Louis Fed President James Bullard said in an interview with MarketWatch late last month that the end-dates of the first two rounds of asset purchases damaged their effectiveness.
Republicans have been opposed to the Fed’s asset purchases as government intervention in the economy. On Wednesday, vice presidential candidate Paul Ryan said he thought they would do “more harm than good.”
President Barack Obama has generally not commented on Fed policy.
In his Jackson Hole speech, Bernanke said the stagnation in the labor market was a “grave concern.”
Bernanke said that prior rounds of quantitative easing had worked and could continue to be effective.
“Overall … a balanced reading of the evidence supports the conclusion that central bank securities purchases have provided meaningful support to the economic recovery while mitigating deflationary risks,” he said.
He said the costs of the program “appeared manageable.”
Bernanke said the first two rounds of asset purchases may have increased private payroll employment by more than 2 million jobs.
Since the recession ended in June 2010, the economy has added a total of 2.8 million private sector and government jobs.
In its statement, the FOMC said that the economy is growing at a moderate pace. Business spending appeared to have slowed. Housing was showing further signs of improvement but from a depressed level.
The FOMC said that inflation “has been subdued” even though some key commodities have increased recently.
The Fed said that strains in global financial markets continue to pose significant downside risks to the outlook.
The Fed said that it will continue its Operation Twist plan to replace short-term securities on its balance sheet with long-term bonds. It will also maintain its existing policy of reinvesting principal payments in MBS.
These actions will together increase the Fed’s holding of longer-term securities by about $85 billion each month through the end of the year, the Fed said.
The purchases “should put downward pressure on longer-term interest rates, support mortgage markets and help to make broader financial conditions more accommodative.”
Souce - Market Watch
Posted by ming at 1:01 AM 1 comments

Head and Shoulders or Double Bottom? 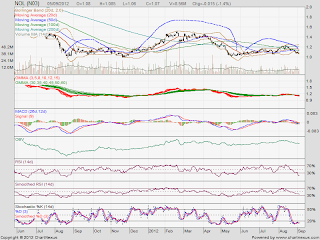 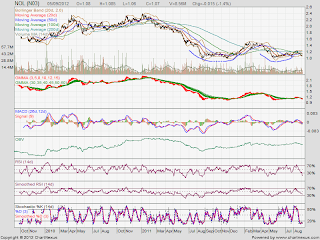 A picture really does tells a thousands words about NOL... Head and shoulders or double bottom??

ming
A 19 year-old guy who started his investment journey at the age of 18. He aims to achieve financial freedom at a young age.